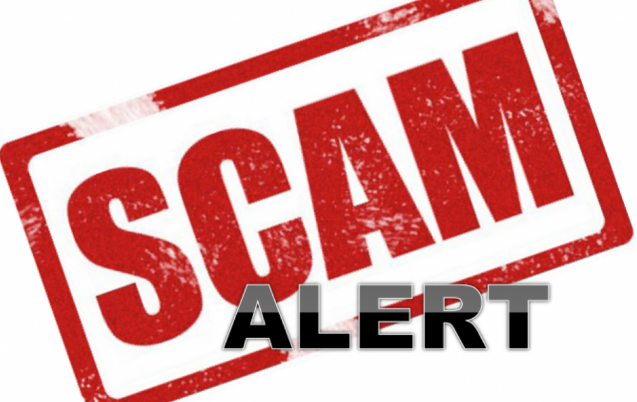 Focus Universal Inc. (Nasdaq: FCUV) bills itself as some kind of forward thinker and mover aiming to disrupt the Internet of Things (IoT) space. In reality, FCUV is a stock promotion.

FCUV is nothing more than a small-scale, money-losing reseller of China-made hydroponics equipment (such as light meters and air filters) and an installer of home theaters (FCUV entered this line of business via acquisition of AVX Design and Integration in March 2019 for $891k). FCUV buys from only one hydroponics equipment supplier in China (controlled by FCUV’s CEO and majority shareholder) and resells it to only one customer in the US, losing money in the process.

When reality sets in, the stock should price significantly lower. Being generous and applying the revenue multiple of its major client, Hydrofarm (Nasdaq: HYFM), the stock should trade at 2x LTM revenue, which translates into $12m market cap and $0.28 share price. 98% downside.

FCUV falsely claims to be a developer of five IoT disruptive technologies, which are:

and 5) an alternative to 5G technology.

However, our research reveals that each of these “technology” promotions are fiction told to retail investors in order to promote the stock.

Annually, FCUV generates about $1.5m in revenue at sub-20% gross margins, $3m in net losses and burns $2m of cash.  Therefore, its cash burn exceeds revenue, and its revenue isn’t growing. This “technology disruptor” company also spends a meager $0.25m on R&D annually (and having only four full-time “senior electrical and computer engineers working on R&D products”) which is a laughably small amount for a company working on five disruptive technologies.

FCUV only has three executives, all from China, as shown below:

Desheng Wang is the founder, CEO and the largest shareholder of FCUV. In the 10-K FCUV said that it has only 13 full-time employees and four part-time employees. It lists the following employees:

FCUV’s legacy company was incorporated in Nevada in 2012. The stock has been trading on the OTC market since March 2014. In December 2014, Desheng Wang acquired a controlling stake in this publicly traded company (making it basically a reverse merger).

In June 2018, Michael Pope, the CEO and Chairman of Boxlight Corp (BOXL), joined FCUV’s Board of Directors. Sheri Longren, the CFO of BOXL, also joined FCUV’s board of directors as well as Greg Butterfield and Carine Clark.

In June 2018, FCUV did a $10m private placement in July 2018 and hired Hayden IR. FCUV applied for uplisting to Nasdaq in July 2018, and engaged paid sell-side coverage Diamond Equity Research in October 2018; FCUV paid at least $19,500 for this report, as stated in the PR:

Now, skip ahead 3 years, on August 30, 2021, FCUV did yet another offering, raising $10m (2m shares at $5 per share). At the same time as the offering, FCUV was uplisted to the Nasdaq stock exchange.

In one week after that, on November 22, 2021, a company called Argus Research put out a “research” report on FCUV (note that the date of the report is November 18, 2021) with a $15 price target. (Argus Research paid-for research also promoted FLGC, a cannabis scam that we exposed back in August 2021. FLGC is down over 90% since our report). The author of both Argus pieces (FCUV and FLGC) is the same person – Steve Silver).

Argus was paid to forecast these made-up numbers – in the disclaimer Argus disclosed that it received a payment for this report: “Argus Research Co. has received a flat fee from the company discussed in this report as part of a “Sponsored Research” agreement between Argus and the company.”

Then, on 4/5/22, Silver published another research report on FCUV, without mentioning his previous report. In this report, he lowered his made-up revenue projections to $10m in 2022 and $75m in 2023. A drastic decline from his earlier projections of $45m and $150m, respectively. Yet, Silver raised his price target from $15 to $16! This makes no sense after such a miss in revenue projections. And he gives no reason for the price increase. The right thing to do would be to lower the price target his changes. But since he’s getting paid to write a bullish report, he is forced to remain bullish.

The following sums up the difference between Silver’s two research reports:

The article is meaningless, it only discusses industry trends about IoT. It doesn’t include any info about what FCUV is doing.

The author of the Benzinga article is Irving Kau, FCUV’s VP of Finance and Head of IR. But the disclaimer also says that the post “was written and/or published as a collaboration between Benzinga’s in-house sponsored content team and Skyline Corporate Communications Group, LLC, a financial partner of Benzinga. This article/video is a paid sponsorship by investor relations agency Skyline Corporate Communications Group, LLC, which is paid by Focus Universal”.  Also note that Kau joined FCUV in November 2021 (https://ir.focusuniversal.com/news-events/press-releases/detail/24/focus-universal-inc-appoints-irving-kau-as-vice-president) but decided not to mention FCUV on his LinkedIn profile (https://www.linkedin.com/in/irving-kau-021b173).

FCUV pays $7,000 in cash monthly to Skyline, as disclosed here:

As shown in the 2021 10-K, FCUV’s historical income statements look like this: 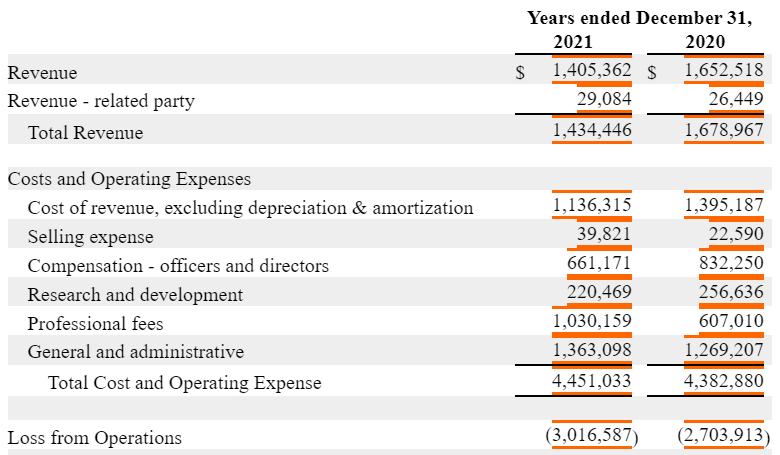 FCUV only has two business divisions: 1) Focus: a hydroponics equipment reseller; and 2) AVX: an installer of home theaters. 82% of sales in 2021 came from the Focus division. Both divisions are losing money. Their five IoT businesses that we mentioned earlier don’t have a functional product yet, which is why none of them are reporting any revenue. The following are FCUV’s 2021 financials separated for each business division: 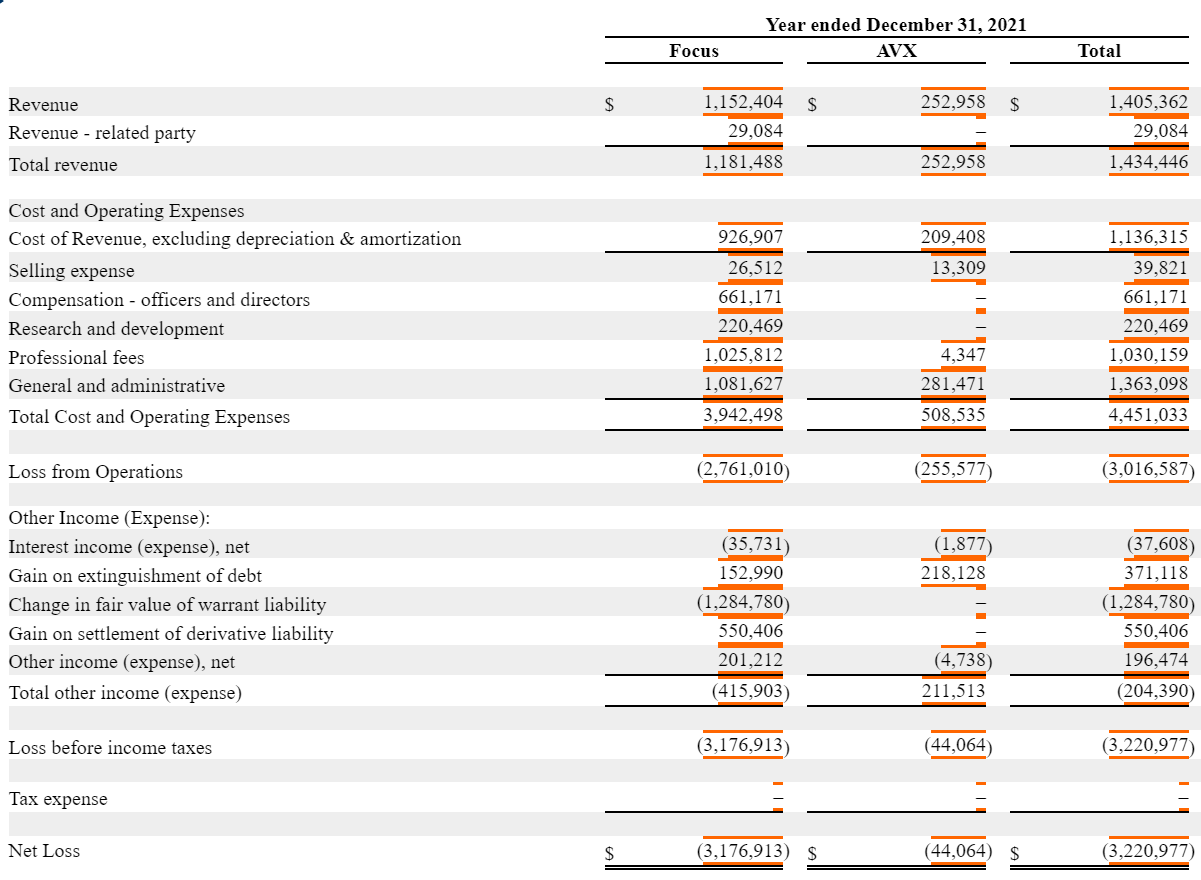 Two AVX employees, its Chief Operating Officer and Sales and Marketing Director, were terminated in April 2020. In May both of them filed a complaint against FCUV (“The complaint alleges claims including wrongful termination, retaliation and various other provisions of the California Labor Code, and various other claims under California state law”).

The following is the AVX Design headquarters. It’s tiny and doesn’t even have a sign in front.

As shown on avxdesign.com, the following is the company’s headquarters address: 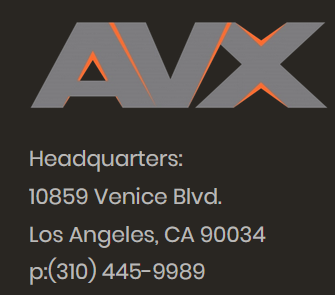 FCUV doesn’t get much business from AVX Design, which isn’t surprising. The majority of FCUV’s sales come from its hydroponics business and from just one client – Hydrofarm. As stated in the 10-K:

“We only have one customer, Hydrofarm, who resells our digital light meters and sensors.”

And FCUV only has one manufacturer for its light meters and air filters which is Tianjin Guanglee Technologies Ltd. As stated in the 10-K:

“We outsource the manufacture of our quantum light meter and air filtration devices to a single contract manufacturer, Tianjin Guanglee Technologies Ltd.”

Focus Universal Is Selling The IoT Story To Promote The Stock

How does a company raise money from public investors while running such a mundane, money-losing business? Sell the IoT story! From FCUV’s uplisting prospectus:

“We have developed four fundamental disruptive proprietary technologies which we believe solves the most fundamental problems plaguing the internet of things industry by:

(1) increasing overall chip integration by shifting it to the device level;

The technology buzzwords above appear to be far-off ideas.

1). a “device on a chip” product is not something revolutionary. Searching “system on a chip” will give you the same description with capable products. Here are 10 manufactures already doing this, and Silicon Labs is one of the top manufacturers for IoT devices. FCUV has no staff with chip design experience, so how do they plan to create a chip that most companies spend hundreds of millions on for research.

2 & 3). a powerline communications platform – Powerline communication has existed for years and many consumers have used it in the past but has been mostly outperformed by advances in wireless. This is nothing innovative that FCUV is building and there already exist many products that communicate over powerlines.

But the most mentioned “invention” by FCUV is a device called “Ubiquitor”, that transmits data between the computer or mobile device and any sensor nodes.

The following are pictures of FCUV’s real business, which are hydroponics devices that FCUV sources from China and sells to Hydrofarm in the US: 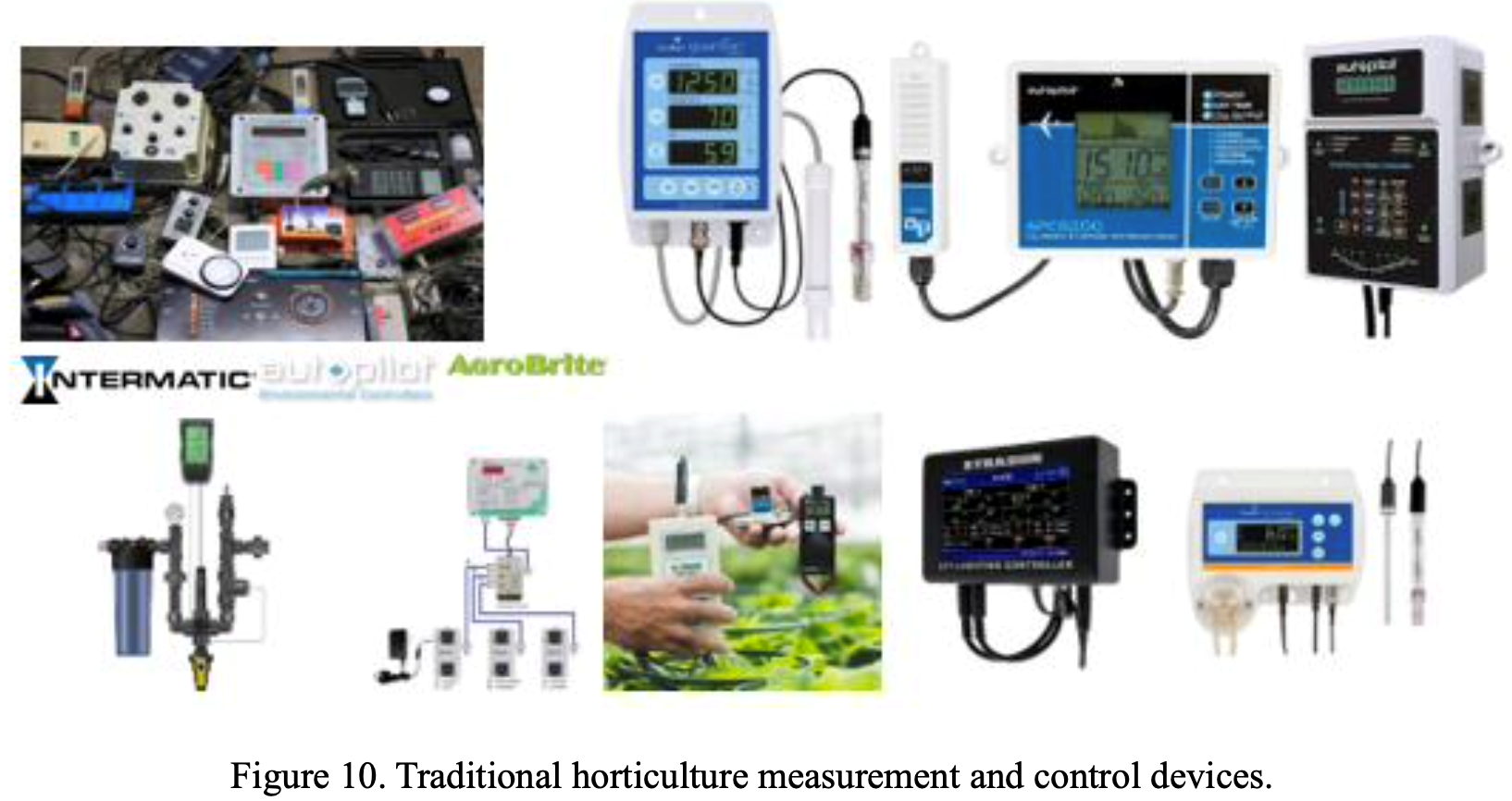 The following figure shows FCUV’s “IoT story” that the company uses to hide its real, tiny, money-losing business. None of the following FCUV products currently exist, nor do any have a prototype: 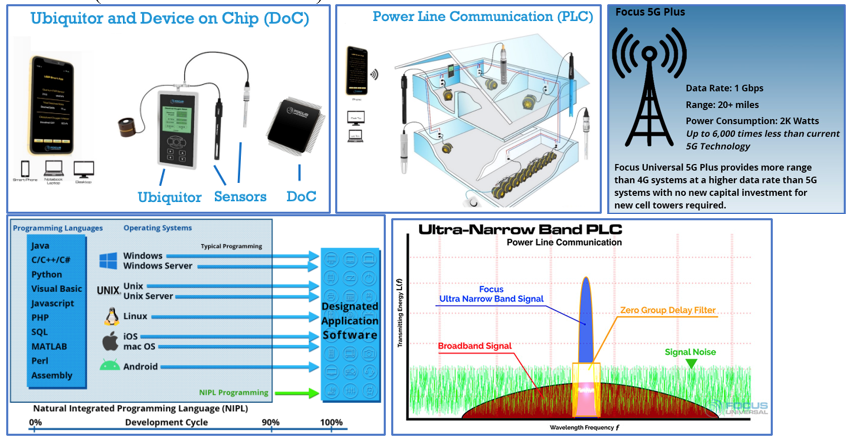 This is what this Ubiquitor device looks like from the prospectus: 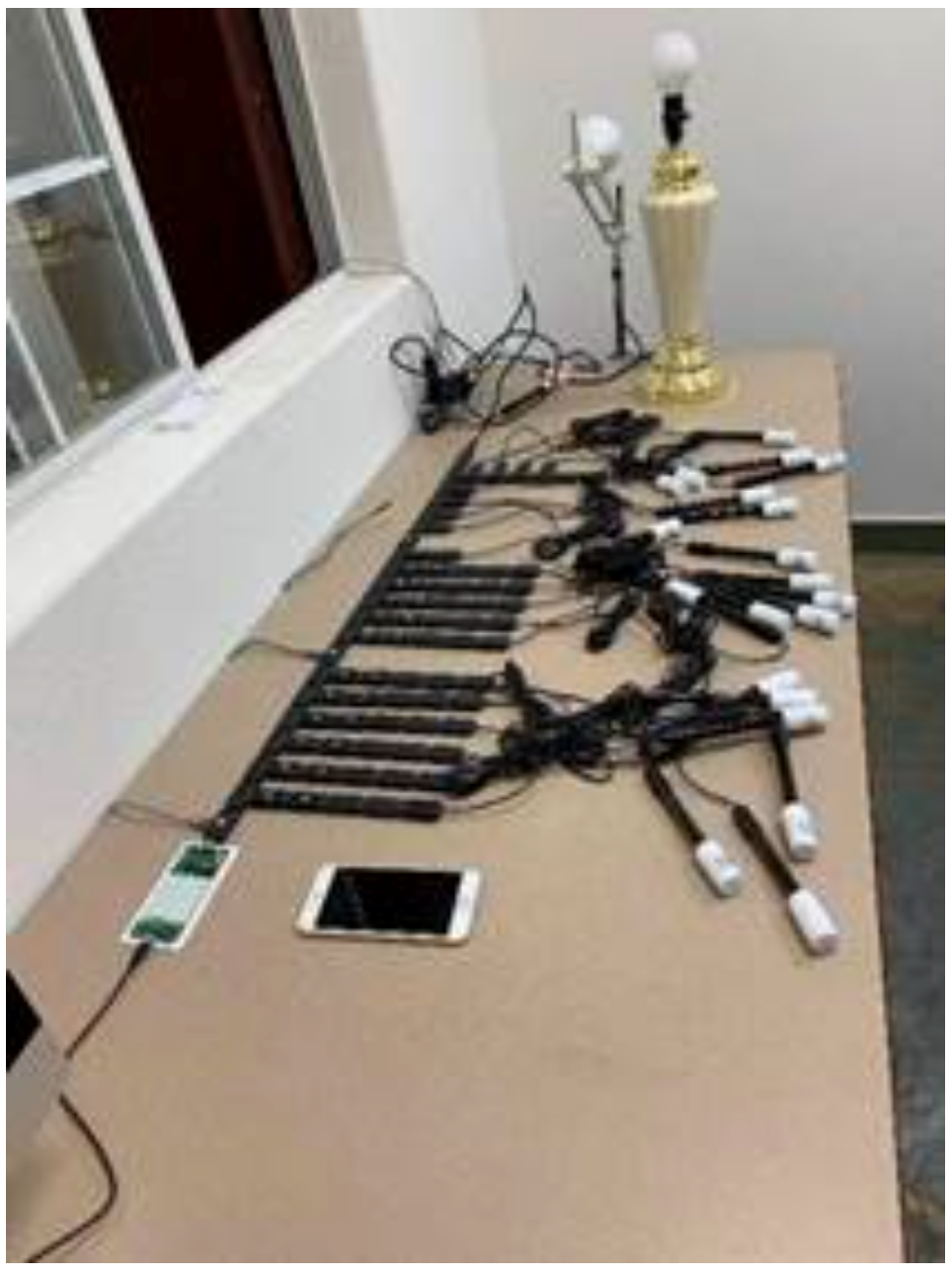 It doesn’t look like much, kind of like a high school project. And it doesn’t have any smart technology incorporated in it. FCUV doesn’t own any proprietary parts, as stated in the prospectus:

“The principal raw materials that we use for our Ubiquitor device are standard industrial electronics parts and plastics that are generally easily available through a variety of U.S. domestic and foreign manufacturers.”

We looked at the components to see what it would cost to create a similar product. Below is their picture and description of FCUV’s Universal Smart Controller. The same product is listed on Alibaba, which shows it is for charging devices such as a phone.

The patent is supposed to describe the uniqueness of the Ubiquitor device. Yet, there are no real insights provided. Note that the patent was filed on November 4, 2016. As we pointed out, it has been over 5 years, yet there is no working prototype on the market.

As shown in FCUV’s 2021 10-K, its one and only Chinese manufacturing partner and supplier for its hydroponics business is Tianjin Guanglee Technologies. The 10-K states:

As shown above, Vitashower was the sole owner of Tianjin Guanglee since 2005.

Desheng Wang was the owner of Vitashower. As shown on opencorporates.com: 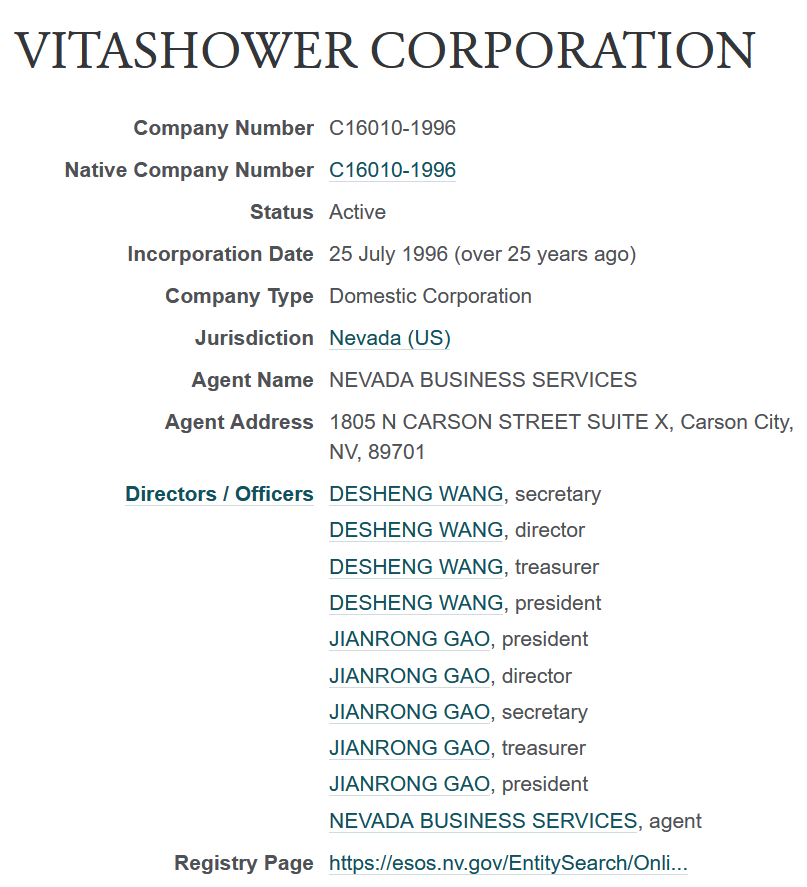 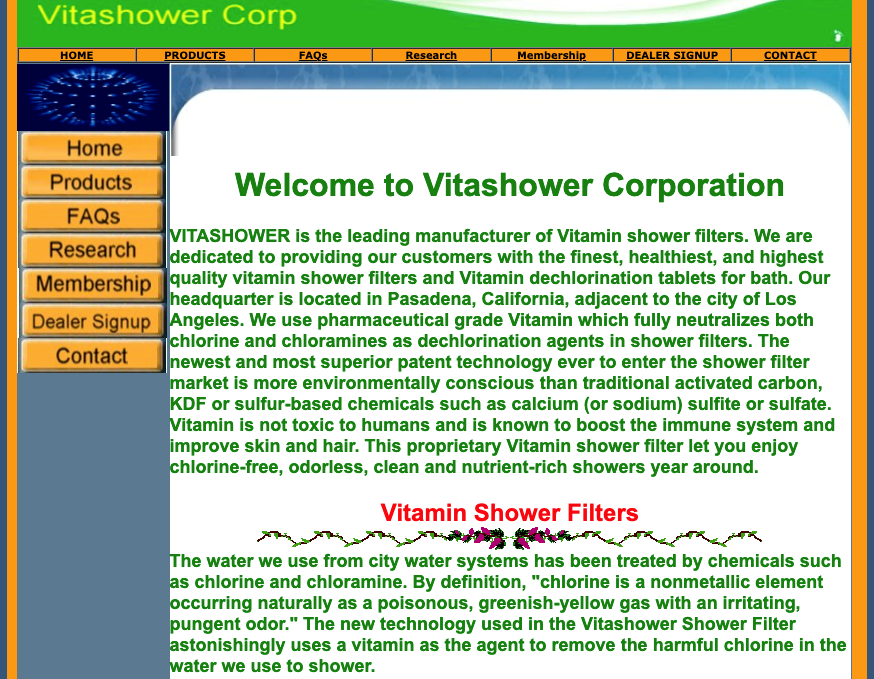 Finally, a check was made about the supplier’s address above (No. 30, Sixth Street, Tianjin Economic and Technological Development Zone) (viewable here) to verify if any products are actually sold by the company. However, it was discovered that the location does not house the business at all but instead is occupied by a different company. A visit to the address and phone call with the owner of the real business states Tianjin Guangli Technology has never been at that address.

Click here to listen to the phone call (in Chinese) and read the transcript and translation.

FCUV is a tiny, money losing reseller of hydroponics equipment (literally FCUV buys the equipment from one supplier in China and resells it to one customer in the US, losing money in the process) that pretends to be a disruptor of several technology verticals. Its stock is propped up by dubious management and paid promoters. Once reality settles in, the stock should rerate significantly lower. Being generous and applying the revenue multiple of its major client, Hydrofarm (Nasdaq: HYFM), the stock should trade at 2x LTM revenue, which translates into a $12m market cap and a $0.28 share price. 98% downside. 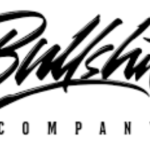 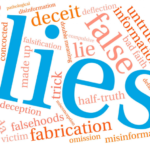